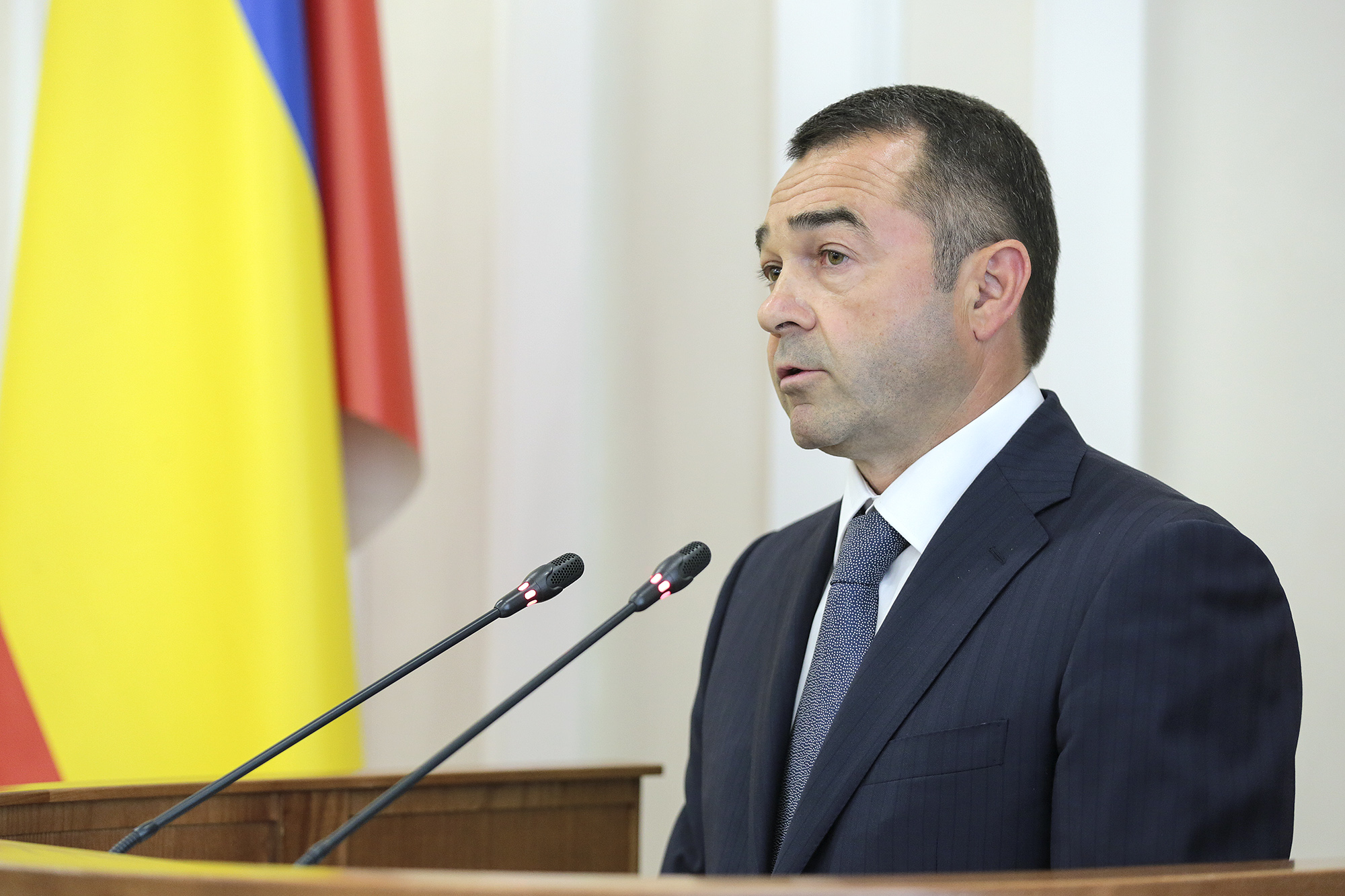 - Dear Yuri Sergeyevich, in December this year the IInd Open Russian Statistical Congress will take place in Rostov-on-don. It is the first time that a statistical forum of such a scope is held on the river Don. What are the expectations of region's leadership, what meaning will such an event have to the further development of the region and statistical science?

- The meaning of the statistical forum, above all, is explicitly represented by the theme "Statistics - the language of digital civilization". Today we all live in the age of the data revolution, where statistics is the language of data, and in the modern world its task is to meet the challenges of the time.

We also, in the Rostov region, while working on a draft strategy for socio-economic development until 2030, understand that the acceleration of the economy is driven by digitalization, the active growth of which is only a matter of time. The opportunities, given by the digital economy, should improve the quality of people's lives, however, they do indeed incur challenges. But we commit ourselves to an ambitious task to make the Rostov region one of the economic centres - the leaders of the formation of the Russian "new economy". Economic growth should be built upon the latest technological base, accompanied by the creation of high-performance jobs, the development of a highly competitive industry and the modernization of infrastructure. The Rostov region should strongly position itself and act as the South Pole of growth, attracting investment capital, intellectual and labour resources.

One of the key trends is the development of digital infrastructure as a factor of the of social and economic systems competitiveness.

Today, a number of projects that will become important elements of the ecosystem of the digital economy, are already being implemented in the region. Particular attention is paid to the development of the telecommunications complex, which is developing in the context of the world digitalization trend. As a result of 2017, 76.0% of the equipment in the region's wired telephone network is based on the use of digital technologies. The coverage of the territory of the Rostov region by mobile radiotelephone (mobile) communication was 90%. 3G and 4G (LTE) are working in the region. More than 98.0% of the population have the opportunity to receive the television channels of the first multiplex in HD. The entire network of postal communication departments of the region (1,130 objects) has been transferred to the new software "Unified Automated System of Postal Communication Units". This work has systematic basis.

In the sphere of public administration, a large-scale introduction of digital technologies is carried out in the areas of "Secure City", e-government, digital signing, digital telephony, digital television. Electronic platforms for interagency cooperation and online portals for the provision of public services are being created.

In the short term, digital transformation will significantly change finance, retail, professional services, arts and recreation, real estate, media and ICT activities; in the long-term perspective, the changes will be experienced in transport, public administration, education and health.

Thus, in conditions of a new objective reality, which confronts us with new grandiose goals, we need to understand how to monitor and evaluate all these phenomena and processes. In this regard, the issues of interaction between official statistics and big data are becoming more relevant today. Big data variety can open opportunities for statistical production in new areas, obtaining information on previously unobserved official statistics.

We hope to receive answers and correct solutions to all these very important issues with the help of statistical science. In our region, which is multinational, constantly developing and improving, increasing economic and production capacity, the II Open Russian Statistical Congress will not only have great scientific significance, but will also successfully solve applied, purely practical problems.

- Yuri Sergeyevich, how often do you use statistics?

- Quite often. Almost daily. After all, all important areas of our work are based on the use of statistical data. This allows monitoring the implementation of the Presidential Decrees, assessing the effectiveness of the executive bodies, analyzing the current situation, monitoring, how such an important generalizing economic indicator, as GRP and its constituent elements, characterizing the development level of the region, is formed. It gives an opportunity to conduct a comparative analysis of the place of the Rostov Region among other regions of the Russian Federation, the Southern Federal District. In addition, it is the statistical indicators that underlie the formation of forecasts and the strategies for the socio-economic development of the region. This is all very important in our daily work.

- Do you think that there is enough official statistical information for the regional authorities to implement their managerial functions?

- Here I want to note that over the past few years there has been a significant breakthrough in terms of the volume of published data, in terms of the openness of the statistical service, much work has been done to ensure a uniform interdepartmental statistical information. And we feel it. Our regional ministries and departments can find a fairly large amount of statistical information on the official websites of Rosstat, Rostovstat, and also on the portal of the Single Interdepartmental Information and Statistical System (EMISS).

But we still have issues related to the improvement of the information and statistical fund, in some areas of work we need additional official statistical information.

- Yuri Sergeyevich, the Government of the Rostov Region supports the IInd Open Russian Statistical Congress in Rostov-on-Don. What results do you expect to get from the discussions within the proposed scientific area?

- Yes, you are absolutely right. The Government of the Rostov Region and the Governor V.Yu. Golubev support the IInd Open Russian Statistical Congress in the city of Rostov-on-Don. A special plan of measures for the preparation and holding of the Congress was developed and approved. The Regional Government, and in particular the Ministry of Economic Development, are in close cooperation with the organizers of the Congress in the city of Rostov-on-Don - the Rostov State Economic University (RINH) and the territorial agency of the Federal State Statistics Service for Rostov Region (Rostovstat).

Despite the fact that we are interested in many scientific areas that will be discussed within the framework of the Congress, the proposed scientific area "Statistics as an instrument for making managerial decisions" naturally attracts the most interest. The leadership and specialists of the regional ministry of economic development will definitely be directly involved in the preparation and work of the round table on this topic. In addition, we assume that colleagues from other regions of the Southern Federal District will also take advantage of this opportunity to discuss with professional statisticians, methodologists, and scientists the issues of their concern and to propose variants for their solution.

As I said earlier, our work is closely connected with the use of significant arrays of statistical information. And the volume of this information every day becomes wider and deeper, in line with the trends of the times and the requirements of users.

That is, today we must be able to work with big data. This requires new knowledge, new tools and technologies for the analysis and effective implementation of management functions. It is necessary to have even closer interaction between the statistical producers and its consumers. We need unified platform solutions, which would be in demand both from the respondents and from the users. A certain forward vector is already set in the All-Russian program "Digital Economy of the Russian Federation", approved last year by the Government of the Russian Federation. Further development of this direction by the scientific community of statisticians will allow improving analytical support for management decisions. I hope that these issues will be actively discussed on the Congress and will find their answers.

- The FIFA World Cup has just recently ended; the games took place in the city of Rostov-on-Don. Will the experience of organizing such a grandiose event in the Rostov Region help in the conduct of the II Open Russian Statistical Congress?

- Today the Rostov region is gaining increasing weight and importance as one of the economically developed and promising regions of Russia not only in our country, but also in the world community. The Don land was always famous for its hospitality. And after the 2018 FIFA World Cup, more than 190 thousand people who visited the Don region in the days of mundial as tourists among which almost half were foreigners, who visited our football matches, can confirm this. After this world-level event, the authority of the region has grown significantly, its image as a major cultural and sports center has been reinforced.

I am confident that joint work on a single platform will unite the best statistical forces of the country, to develop a dialogue between representatives of government, business, and scientific communities in the field of one of the most promising areas - the data science. Rostov Region will confirm its status as one of the country's scientific and economic centers. And the Congress will serve to strengthen international and interregional cooperation, and first of all, in the field of statistics.

We invite not only scientists, economists, statisticians, but also our colleagues - representatives of regional executive bodies, as well as local self-government bodies to this large-scale event. I hope that staying on Don land will contribute to even more fruitful work of all the participants of the Congress, and the adoption of the most correct and effective solutions.